The latest firmware version can be viewed at this GitHub Releases page. The code itself lives in this GitHub Repository where it can be downloaded for use throughout this page.

The firmware is primarily developed using PlatformIO. Each repository has a dedicated directory you can open using the "Open Project" menu of PlatformIO. All dependencies are automatically installed when you compile the project for the first-time.

This firmware will work for all step-series but you need to specify the target board before you compile it. Please refer to "Set the compile target" below.

Using the Arduino IDE requires a bit of manual setup than PlatformIO. To begin, the Arduino Zero board must be first installed in the IDE using the Board Manager. This Quickstart Page is a great resource for how to do this procedure.

Next, the following libraries need to be installed. Here's a page describing how to install libraries.

Install the following libraries from the library manager in the Arduino IDE. You can find a detailed guide to install library here.

Note for the OSC library

There many OSC libraries that may be listed in the Library Manager. This project uses the library made by CNMAT and is listed as OSC. Note that the creators are listed as Adrian Freed and Yotam Mann, not CNMAT. 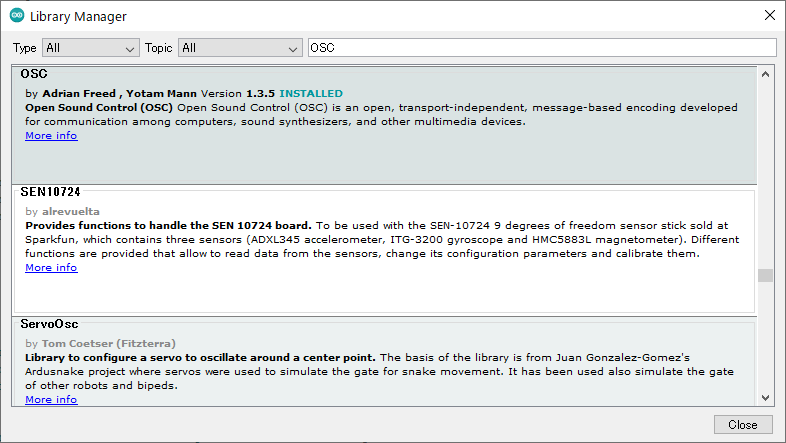 The Arduino sketch is available from here; https://github.com/ponoor/step-series-universal-firmware/releases

See the "Assets" of the latest Release and download step-series-universal-firmware.zip. These zip files only contain required files to compile with Arduino IDE.

There is a list of boards at the beginning of boardsDef.h. Remove the comment // for the target you want to compile for. For example, a code for STEP400 will look like this;

If the process is completed without errors, proceed to uploading. Connect your PC and the Arduino with an USB, then select the serial port from "Tools" -> "Port" then upload it.

Notes for uploading the Arduino sketch